The Federico Fellini Platinum Award for Cinematic Excellence is awarded to

one of the most important, original and active directors on the international scene who has helped to clarify the prerogatives of real-life cinema.

Whether in India, Mexico, California, Lampedusa, Syria, Iraq, Kurdistan, Lebanon or Rome, Rosi’s cinema crosses geographical boundaries, displaying their porosity and lability. He constantly searches for the stories of various men and women: their dramas, their fatigue, their fears, their past or their sometimes-extreme choices. He approaches human beings by transforming himself into an observer, an accomplice or a witness of their existence and resilience. The protagonists of his stories have been: a hitman or a community of dropouts in the Californian desert, an Indian boatman or Kurdish female soldiers, the inhabitants of the island which epitomizes these recent years of migration and tragedy or the people who gravitate around Rome’s Great Ring Road. “Fuocoammare,” “Below Sea Level” and “Notturno” depict just some of his journeys by way of film into the contradictory and complex fabric of our present day.

The Federico Fellini Award is therefore awarded to Gianfranco Rosi, the man with the movie camera for this millennium, who accompanies us to where we never thought of going and where we can comprehend much more about this planet, which embraces us as its guests. 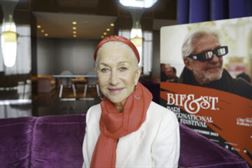